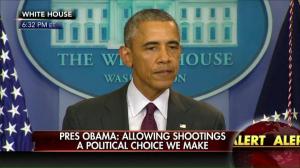 This week President Obama prayed for the victims of yet another mass shooting. He said:

This has become routine.

The reporting is routine, my response here at this podium ends up being routine.

The conversation in the aftermath of it has become routine.

He’s done this 45 times already this year so he knows what’s next.

He’ll call for tighter gun laws and be instantly blocked by those who argue an individual’s right to weapons is protected under the Second Amendment. Corporate media will adopt their traditional sides of the debate, specifically:

a) the government is losing power to protect you or

b) the government is gaining power to control you under a totalitarian police state.

This will raise still more fear and paranoia in the general population, some of whom will conclude:

a) it’s time to protect themselves and their families or

b) it’s time to defend freedom from the government

Politicians and lobbyists will use the confusion to score power/money/votes and the debate will die.

The news cycle will move on to other things until this happens again.

That’s the problem with What We’ve Always Done; although it has the advantage of familiarity (everyone knows the routine) the result is just as predictable; in this case, no change, no solution.

Which is usually a sure sign that it’s time to break the routine and try something new.

And even though new ideas come with a downside – no-one knows if they’ll work until we try – surely that’s an improvement on what everyone knows won’t work at all.