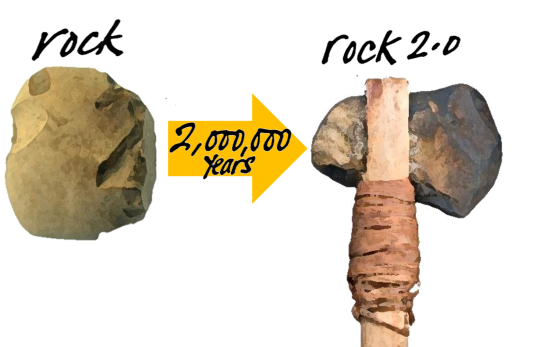 Way, way back in the Paleolithic Era, we had just two tools: the rock and the stick. And that’s how things stayed for two million years until someone asked the question: ‘Why don’t we put the rock ON the stick?

That’s when humans invented Rock 2.0, an innovation that quickly mutated into the hammer, the axe, spear, arrow and knife. Soon there would be chisels, saws, scythes, nails, ploughs and hardware superstores.

Humans invent. It’s our thing. We just can’t help ourselves. Look around you. See anything that could be better? Easier, stronger, fairer, cleaner? Safer, cheaper, lighter, greener? Innovation is just a fancy way of saying Making Things Better, something we all want to do, given the opportunity.

So how come it’s such a big deal all of a sudden? Well, for two centuries we’ve been kidding ourselves we’re on track to a glorious future where production, consumption and globalisation would guarantee peace and prosperity to all. But we’re starting to see that kind of thinking is taking us into a future nobody wants to live in.

Now we need to rethink pretty much everything we do, to Make Things Better. We need better approaches to business and industry, better ideas about politics and government, better products, process and procedures. So much has to change, it doesn’t really matter where you start.

So what are you waiting for? Pick something you can make better and get to work.