On a cold Sunday morning at precisely 4:50am, September 3, 1967 every road vehicle in Sweden came to a complete stop… then veered slowly from the left-hand side of the road to the right, a transition that took just 10 minutes.

By 5.00am an entire nation had reversed its most fundamental road law. 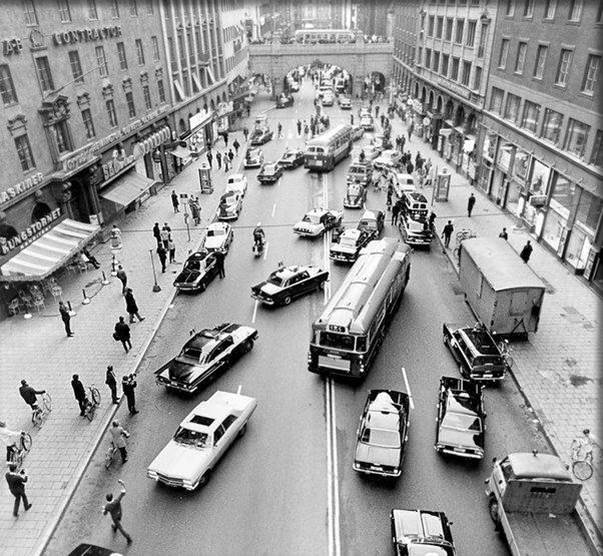 But those 10 minutes were merely the final piece of a puzzle that involved four years’ intensive planning, education and promotion. Traffic engineers had already prepared new road signs, lights and lines; stops were already repositioned, intersections already reshaped, and right handed buses had already replaced left-handed trams in preparation for the ‘Day of the Right Hand Traffic Diversion’ (or ‘Dagen Högertrafikomläggningen’).

A graphic icon explaining the transition had already appeared on street corners, bumper stickers, milk cartons and even underwear. Coloured driving gloves reminded motorists of the new rules and a national song contest to promote the change had already indelibly imprinted “Håll dig till höger, Svensson” (Keep to the right, Svensson) into every Swedish brain.

Sweden recorded fewer accidents than usual on ‘H Day’, perhaps because driver attention and caution was uncharacteristically high; motor insurance claims dropped by 40% and stayed down for six weeks before returning to ‘normal’.

Sure, change can be hard.

It’s even harder when it represents the exact opposite of what we’ve always done… and harder still when it must happen for an entire country at the exact same time, especially when that country had already voted decidedly against the change.

But the Swedes have proven that with thoughtful planning and communication, dramatic and sudden change is not only possible, but relatively easy.

And, in the case of Dagen Högertrafikomläggningen , probably easier done than said.

*83% voted NO but the government went ahead anyway.