Every now and then a little thing becomes very big, very fast. You see this on the roads almost every day; a minor traffic incident can escalate in a major outpouring of rage, even violence. You see it in the news; a police shooting in Tottenham triggers a fortnight of violent clashes and arson across London,  the death of a Tunisian merchant triggers the Arab Spring and the transformation of North Africa. You see it in history; the assassination of an Archduke triggers World War One.

Do little things really have that much power?

Well, no, they don’t. But they often awaken something that does.

Firefighters are used to dealing with things that explode. They know a tiny spark isn’t a big deal on its own, but add a gas leak and it’s a fire. Add a sudden rush of oxygen and it’s a catastrophe. They know that when these three elements come together in the same space at the same time, things get very bad, very fast.

They call this deadly cocktail of fuel, spark and oxygen the ‘Volatile Triangle’ and it explains both the essential dynamics of any explosive fire and the basic strategies needed to get it under control.

But could it apply to volatile situations that aren’t literally on fire?

It explains how an insignificant event can have explosive effects; by igniting an existing stockpile of fuel. Imagine the pent-up frustrations of the motorist, the barely-supressed racism of a reluctantly multicultural society, the crushing poverty of a struggling nation; powder kegs of old fuel just waiting to explode. 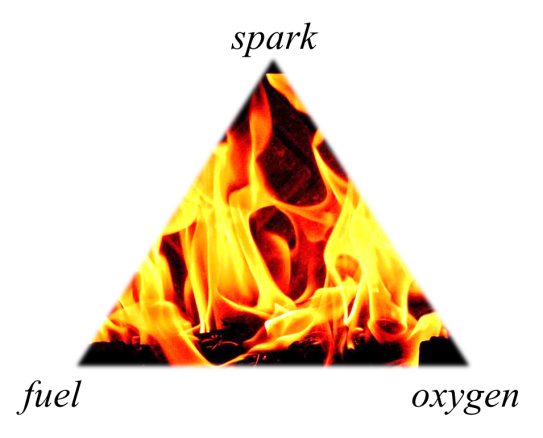 But to turn a fire into a firestorm takes oxygen to fan the flames, which is why firefighters pay close attention to the direction and strength of the prevailing winds.

Could the London Riots or the Arab Spring have spread as fast and as far as they did without gale-force media coverage? Could the protestors have organised so quickly without Facebook and Twitter? Would they have even wanted to if they hadn’t seen the coverage on CNN or the BBC? What direction does 24 hour news coverage take a story; does it cool things down or fire them up? And as the crisis unfolds, will journalists seek out voices of moderation and reason or broadcast the opinions of religious or political extremists?

Of course, you can’t always control the spark (it could be anything), but you can reduce the fuel by addressing old frustrations, tensions and inequalities before they get too hot to handle. But if you miss the opportunity and the spark has already started the fire, cut off the oxygen. Find who (or what) is fanning the flames and turn off their microphone.

By helping us to understand any flammable situation in terms of the spark that triggers it, the fuel that powers it and the oxygen that feeds it, the Volatile Triangle tells us how to stop things from blowing up.

And that’s got be a good thing.