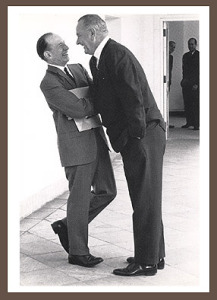 I love this photo; it shows US Supreme Court Associate Justice Abraham Fortas getting what political historians call ‘The Johnson Treatment.’

US Presidents are almost always shown deep in thought (Lincoln pondering, JFK dreaming, Nixon scheming) but just about every picture of Lyndon Johnson shows him monstering people into doing something they hadn’t planned on doing.

LBJ was a bully. And a flatterer. And a salesman. Seducer, manipulator, trickster, clown, deal maker and good ‘ol boy; one colleague famously said: ‘Lyndon was thirteen of the most interesting and difficult men I ever knew’. 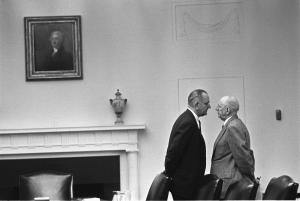 The supreme political operator, LBJ was prepared to say or do whatever it took to get stuff done.

Whereas JFK had been young, sexy, energetic, charismatic, witty and stylish, LBJ was none of these things, which might explain why few remember this large, crude man a great leader. History celebrates the visionary in the spotlight; it often forgets to look behind the scenes to see the machinations that translate visions into actions.

Dr King had the dream… but not the deal. Which is why he needed a dealmaker. 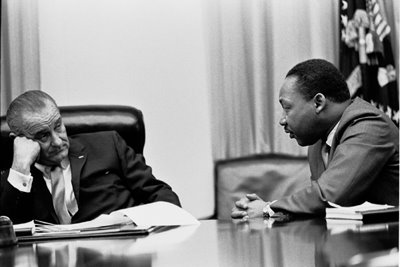 Someone to shove Civil and Voting Rights through a reluctant Congress. Someone who could wrangle an African American justice on the Supreme Court and kickstart Medicare and Medicaid.

Someone who could push comprehensive welfare and education reform, liberalise immigration policy and deliver JFK’s crazy promise to land men on the moon before 1970.

Change doesn’t happen unless a whole lot of people suddenly find themselves doing something they hadn’t planned on doing.

That’s why I love these photos.

Because they show what it actually takes to make dreams come true. 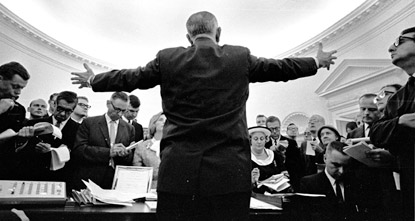