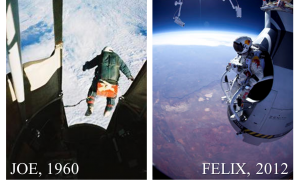 Last week Austrian daredevil Felix Baumgarten slid back the hatch of a tiny capsule and stood on a narrow jump platform 128,000 feet above the Earth. As he prepared to leap from the ‘Edge of Space’ the voice of his Mission Controller talked him through the last few steps… before the Big One.

It was the kind of no-nonsense, matter-of-fact voice you’d want in a risky and complicated situation, but it was also strangely protective, almost fatherly. A voice that somehow understood not just what Felix was doing, but what he was feeling.

Fifty-two years earlier, US Air Force Captain Joe Kittinger looked down from a rickety wire cage suspended from a balloon 107,800 ft above the ground. Alone, with no voice of experience to guide him, he uttered the words ‘Lord, take care of me now’ and leapt into The Complete Unknown.

For four minutes and 36 seconds Joe fell further and faster than any human being before him; at his maximum velocity (988 kph) his body underwent acceleration stresses 22 times greater than the force of gravity. A tiny leak depressurised his right glove, blowing his hand up to twice its size.

What Joe did on August 16, 1960 was incredible. But why he did it is truly inspiring.

See, in those days, America was committed to the exploration of space but no-one had the faintest idea of what that actually meant. No-one knew how fast a human being could travel, let alone what effects those speeds would have on the mind and body… and no-one had a clue what kind of suit would protect an astronaut from the temperatures and vacuum of space.

According to the boffins, there was only way to find all this stuff out. Send a guy up as high as you can, order him to jump and see what happens. Joe Kittinger was that guy.

Of course, these days we have ample experience of the extremes of space, but only because people like Joe experienced it first. So by 2012, when Felix Baumgarten climbed out of his high tech capsule in his state-of-the-art spacesuit, his every move streamed live to computer screens around the world, he had the benefit of half a century of space innovation, none of which could have happened without That First Big Step.

Poised to step off the platform and into history, Felix Baumgarten got a few final words of encouragement from his Mission Controller, a man who had come out of retirement to help the new kid knock off the old legend.

Because that’s what mentors do.