Thomas Edison was once asked ‘How many crazy ideas do you have to go through before you hit on a really great one?’ to which he answered: ‘All of them’. He knew that great ideas often evolve from a process which produces all sorts of strange creations along the way. 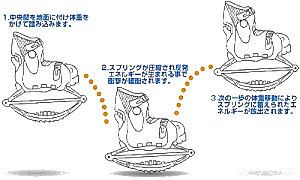 Consider the output of the world’s most prolific inventor, Dr Yoshiro Nakamatsu, who currently holds 3,377 patents, which includes things like his musical golf putter, the spray-on aphrodisiac, pogo boots and (my personal favourite) the Attack Wig, the world’s first hairpiece engineered for self-defence. But in amongst all the craziness of underwater notepads and brain-boosting armchairs there’s some ideas you might be more familiar with: the digital watch, the floppy disc, the CD and the fax machine.

That’s right; the same brain that gave the world the StayAwake Pillow also dreamed up the karaoke machine, the taxi meter and DVD. That’s what happens when you open your mind; all sorts of things blow in. The trick is to scribble them all down without hesitation or evaluation, because as soon as you start judging ideas your brain stops making ‘em. It’s almost as if you’ve got a switch that flips between ‘imagine’ and ‘critique’… for most of us it’s an either/or kinda thing, so you need to go for quantity by ignoring the quality, at least in the beginning.

The creative mind takes a little while to warm up, so your first ideas are likely to be pretty obvious, the sort of thing that’s either already been done or will be by the end of the week. That’s ok, you’re still in low gear so don’t expect too much brilliance just yet. Whatever you do, don’t stop, even if the gaps between ideas seem excruciatingly long… we all go through those.

You’ll know second stage has kicked in when you start getting ideas that are both exciting and intimidating, the kind you’ll feel the instinct to squash. When your mind flips between ‘how awesome would that be?’ and ‘how the hell could I make that happen?’ you’re in the sweet spot where ideas are just crazy enough to capture people’s imagination but not crazy enough to be completely impossible. These are the ideas most likely to pan out for you in the short term, so make sure you find ‘em all.

With each new idea, your mind gets a little wider, letting even bigger ideas climb in. That’s when you find yourself in the third stage, where the ideas are wildly impractical, bizarre, even disturbing. Enjoy your time in this space, surrender to its madness and take the opportunity to push your imagination to its limits. Because somewhere in this Crazy space is where the future waits; innovations we take for granted today seemed crazy a mere decade ago.

Who knows? One day, we’ll all be wearing Attack Wigs.