This is what the future looked like when I was a kid. 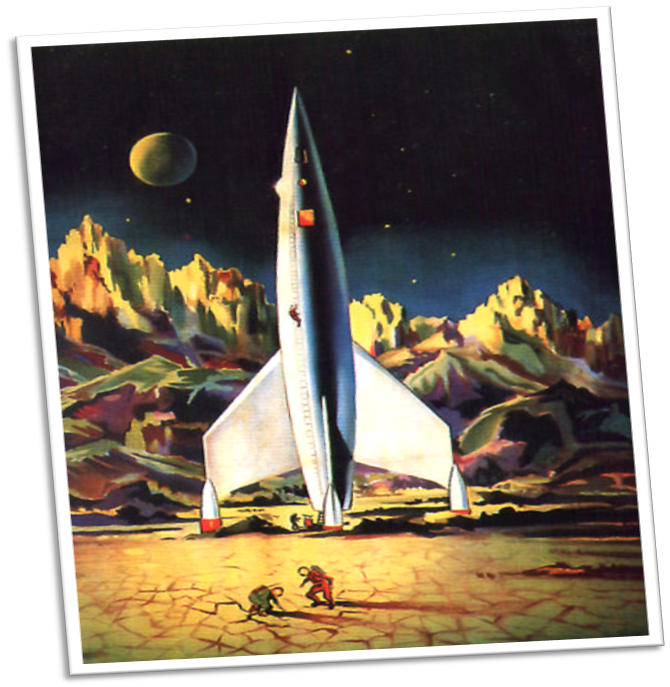 A gigantic spaceship, powerful enough to get to the planets and back, strong enough to withstand massive forces, smooth enough to slip in and out of our atmosphere, simple enough for a human to control, light enough to float back to Earth on a parachute.

Already you see the problem: that’s a lot of engineering to be dragging around and most of it you won’t need, most of the time. And take a look at the poor sod climbing the entire length of the thing just to get in and out of it.

That was the genius of the Saturn V: a series of smaller vehicles, each with a specific job to do for a limited time… after which you let it go. That’s a ship that gets lighter – and therefore faster – as it flies.

Q. What to do when One Big Thing won’t work?
A. Break it into Lots Of Little Things.

Mind you, segmentation is hardly an original idea; whoever invented the postage stamp grasped the concept long ago. Exchanging the One Big Thing for Lots of Little Things shifted computing from massive mainframes to tiny PCs, split the Holland Blind into Venetians and broke the single chocolate slab down into blocks, fingers and bars.

Segmentation created modular furniture and the payment plan, gave us staysharp pencils and snap-off blades, Lego and Twitter and of course, Sliced Bread, the best idea since… since… well, you know.

Struggling with a Great Big Thing that won’t work?
Slice it up. Break it down. Spread it out.

You’d be amazed how far a trick like that can take you.