That’s true enough… but it also flows the other way. If someone finds a better way of doing something and sticks with it long enough, others are bound to give it a try. With time, the ‘new way’ becomes ‘our way’ and what begins as experiment soon becomes standard practice, then habit then tradition and ultimately, culture.

In 1953 a group of primatologists sent to study a community of macaque monkeys on the Japanese island of Koshima spotted one that had invented her own way of doing things.

Whereas the rest of her tribe would brush the dirt off their sweet potatoes before eating them, Imo preferred to wash her meal in river water, something no researcher had ever seen before. Her mother and young siblings were first to follow Imo’s lead and soon her extended family were doing it, too. 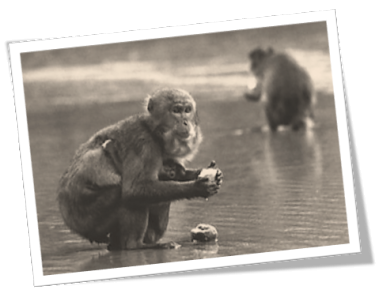 By 1957 ‘Imo’s way’ had become common practice across the island and had passed on to a new generation of macaques.

But by that time Imo had not only discovered that potato tasted even better when washed in the salty water of the ocean but that the river was better used as a way to separate grit from grains.

In 1965 lead researcher Masao Kawai documented ‘seed filtering’ and ‘ocean seasoning’ as a traditional practice entirely unique to the Macaques of Koshima; a shared, learned behaviour that distinguished that group from any other.

If that’s not a culture I don’t know what is.