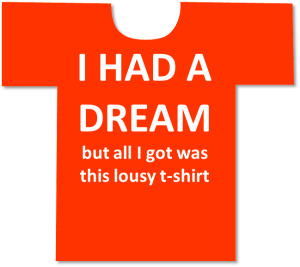 …no-one was unclear about the Prime Minister’s plan: We Shall Fight Them.

That’s because Churchill was schooled in the art of persuasive language and made full use of every rhetorical trick in the book (in this case, the repetitive device known as anaphora) to drive his message into people’s heads, or rather, their hearts.

As he once said ‘It is the aim of the speaker to compress all his ideas into slogans’ and the great speechwriters and speechgivers of history have followed his lead: from Franklin Roosevelt (‘We have nothing to fear but fear itself’) and JFK (‘Ask not what your country can do for you’) to Martin Luther King (‘I have a dream’) Gough Whitlam (‘It’s Time’) and Barak Obama (‘Yes We Can’).

It’s a technique that solves one of the biggest challenges for any communicator, namely, what to leave out? Whereas most of us write reams of notes then struggle in vain to squeeze them all into a message, the great orator starts with a handful of key ideas, each expressed with the brevity of a bumper sticker or T-shirt.

Try this exercise: Imagine your topic as a clothes line with no more than four T-shirts on it. Each has a simple but powerful slogan of very few words. From left to right, these basic thoughts spell out your argument, like this;

This technique forces you to clarify your key thoughts and to arrange them in the most compelling and persuasive order. Once you’ve got your ideas down to just four t-shirts’ worth you’ve got the bare bones of your communication, the essence of what you are trying to say.

Could you then put a bit more flesh on those bones with a few more words and ideas to fill out the gaps between the slogans?