According to Australian law, anyone travelling in a car must wear a seatbelt at all times. But the taxi drivers of New South Wales flatly refuse to comply, arguing that, in the hands of a homicidal maniac, the belt can be used to strangle a cabbie.

All of the cabbies I’ve asked know a guy who knew a guy who heard a story from some other guy… but none of them can site a single, documented case of The Seatbelt Strangler. I’ve searched the internet, scanned news databases and even read industry reports and submissions on the issue and yet, so far, nothing.

Yet cabbies would rather risk flying through a windscreen than an encounter with You Know Who. 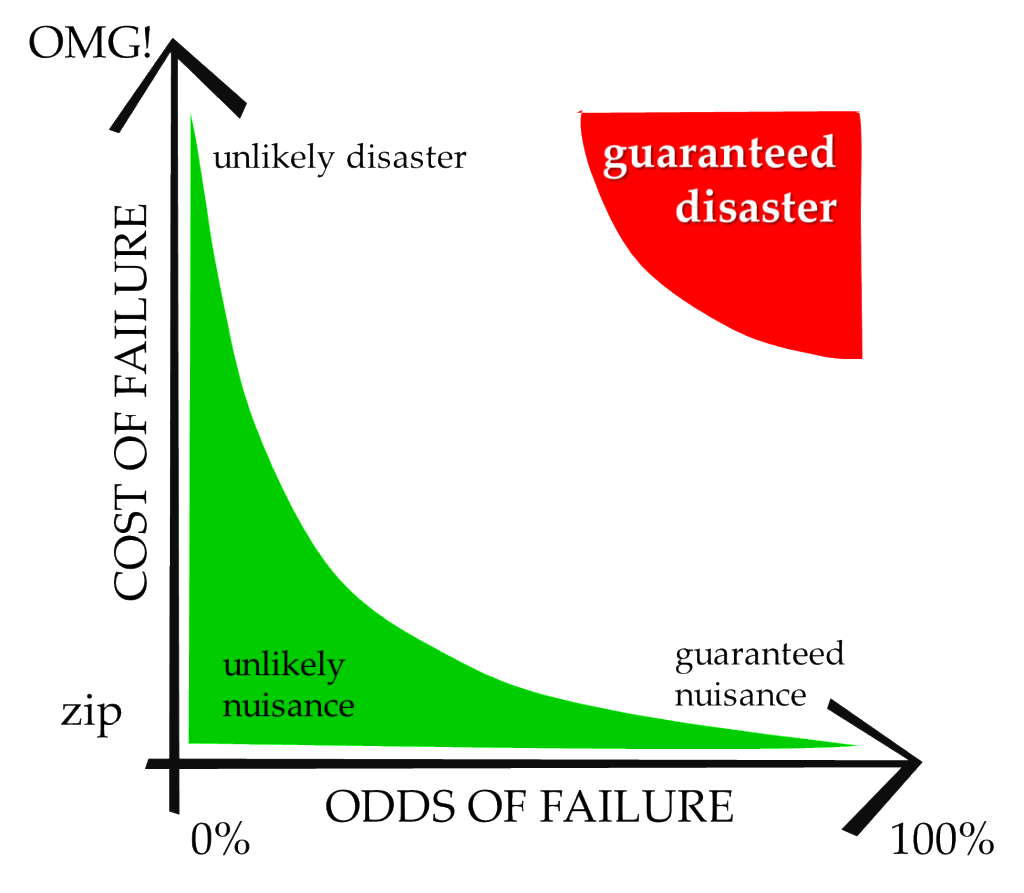 Most people are afraid of the wrong things. We’re more nervous in a plane than in a car, more worried about sharks than cholesterol, more anxious about suicide bombers than superbugs, even though statistics constantly show us we’re way more likely to get killed by a swimming pool than by a psychopath.

So it’s not enough to think of risk just in terms of the sheer awfulness of an event, we must also consider the odds of it ever happening. No matter how horrific a plane crash might be, it’s not really an issue if the chances of it happening are close to zero. Low Probability + High Cost = Unlikely Disaster, the kind most of us don’t lose any sleep over.

There’s not much point worrying about getting a parking fine either, but for the exact opposite reasons: it’s the sort of thing that’s very likely to happen but when it does it’s hardly the End of the World. High Probability + Low Cost = Likely Nuisance, the kind you take every day without much thought.

Another thing we don’t give much thought to are telling jokes that might not work, renting movies we might not like, ordering meals we might not enjoy. Low Probability + Low Cost = Unlikely Nuisance. Probably won’t go too wrong and even if it did, so what?

That’s three kinds of risk not worth worrying about. So what risks should we worry about?

Think of all the risks you’ve already taken these past few weeks. Think of those ‘Russian Roulette’ moments when you held your breath and secretly prayed for something to go your way because:

a) you were almost certain it wouldn’t, (High Probability of Failure)

b) you dreaded the consequences if it didn’t.  (High Cost of Failure)

If you’ve ever been in that situation where you found yourself whispering ‘pleasepleaseplease…’then you know what I’m talking about.

That’s the only kind of risk you need to calculate. Pretty much everything else is worth a shot.

So what are you worried about?