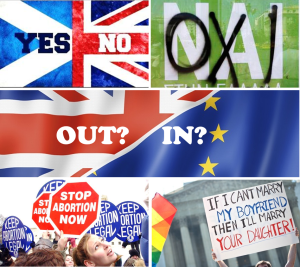 It should come as no surprise that, according to Google Trends, the most searched-for question from its UK users last week (after ‘What happens if we leave the EU?’) was ‘What is the EU?’

What’s surprising is the question didn’t really pop up until AFTER the British people had elected to leave the European Union.

Entrusted with the most momentous decision of their lives, it seems the population somehow reached an answer without understanding the question.

Why do we feel capable of making important decisions about complex issues with little or no knowledge? Why do we interrogate our waiter over the tiniest details of a dinner menu but give no thought to issues of historic magnitude?

Maybe we’ve forgotten the difference between choice and decision.

Presented with a hundred brands of breakfast cereal that are more or less the same we will initially try to ‘figure out’ the best one until we accept the profound futility of it all; there is no logical reason to prefer Oat Puffs to Wheatie Pops.

So we might as well buy Wheatie Pops because we like the name or the cute kid in the ad or because our creepy old uncle always smelled of Oat Puffs. And that’s how we find our favourite beer, shampoo, sports team, car or cop show; our brains are no use when it comes to subjective questions so we let our emotions cast the final vote.

That’s when we make a choice, an inconsequential selection based on purely personal, subconscious motives. That’s what most of us do most of the time when we think we’re deciding… but a decision is a very different thing indeed.

A decision is the rational result of a methodical process that considers all possible outcomes of a finite number of distinguishable alternatives: it’s the exact opposite of choosing a breakfast cereal.

As you might imagine, making a decision is a tedious business which is why we reserve it for issues of real significance, the kind of once-in-a-lifetime verdicts that deserve that level of concentration. That’s why we used to call it ‘deliberation’ – because it was a slow, deliberate process.

But who has time for that these days? We’re expected to make hundreds of ‘decisions’ each day, about everything from phone plans and parking rates to investment bonds and corporate takeovers and we’d be lucky to have more than a few seconds to weigh up all the differences – assuming there are any.

So we choose. Quickly. Subjectively. Impulsively. And so long as the options are largely identical and the issues are largely trivial, it works pretty well. And the fact that we mistake our irrational choices for rational decisions isn’t that much of a problem, either.

Until it’s time to debate a law. Or pick a leader. Or determine a future.

Because if we don’t know the difference between choosing our breakfast cereal and deciding the fate of our children then I’d like to propose we shouldn’t be trusted with making any decisions at all.

Should we put that to a vote?

NB: Don’t be too hard on the English; a few years back when US citizens were asked ‘Should America bomb Agrabah?’ 30% said YES, 13% said NO and 57% said they were NOT SURE… and 0% knew Agrabah was the fictional setting of Disney’s ‘Aladdin’.