You’ve heard it before: “No. You can’t do that. The rules say so”.
But you know what? Sometimes the rules ain’t what we think.

Some rules don’t actually work. Consider ‘I before E except after C’. Great for words like ‘receive’, ‘conceit’ and ‘perceive’ but useless for ‘weird’, ‘seize’ and ‘weight’. In fact, there are only 43 words where it works and 923 where it doesn’t. Is a rule with 21 times more exceptions than cases worth keeping?

Some rules aren’t even there. The retirement of Pope Benedict challenged a 600 year rule, which, on closer investigation turned out not to exist.

Some rules have already been rewritten. It’s worth remembering that the US Constitution has undergone 27 rewrites over the years and even one rewrite of a rewrite: the 18th Amendment put Prohibition in, the 21st took it out again. And even the Ten Commandments come in three quite different versions (two in Exodus, one in Deuteronomy).

Some rules are already broken. God’s views about art are pretty clear in the Second Commandment (no religious images) yet churches are full of them.

Some old rules can’t solve new problems. The authors of the Second Amendment never imagined a future where people would buy machineguns from Walmart, so their 224 year old rule is way past its use-by when it comes to the gun ‘debate’. 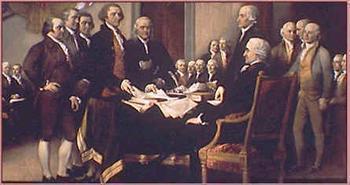 Remember: all rules were made up. Mostly in the past.
By some guys who didn’t imagine our world and who ain’t here now.